Back in April 2010, Sub-Culture brought Shackleton to China for the first time. This was a big deal for us, we had wanted to book him since the early days of Shelter but as he rarely travels outside of Europe it wasn’t possible until he decided to do his first world tour in 2010. Understandably excited about the event, we wanted to make a special poster for the occasion and so contacted Skull Disco artist Zeke Clough to see if he would be interested in doing the design. To our delight he agreed and the result (above) totally blew us away. It was by far the best poster we had done for any of our events up until then and we felt that simply printing regular posters wasn’t enough. Around the time we had received the poster from Zeke Split Work’s Jue festival was in full swing and one of the events included a workshop from a new screen-printing studio called Idle Beats. I have been a collector of screen-prints for many years and so was excited to have finally found someone doing it in Shanghai and so contacted Nini Sum to see if she would be interested in collaborating and producing a print of Zeke’s poster. Nini was up for it and so for the event we produced a short run of hand-pulled posters.

We really enjoyed working together and so decided to do it again the following month when we hosted Clouds and Desto from Finland. Gregor Koerting had just joined Idle Beats and had an idea for a poster and so he designed our second screen print. Again, the project was a success and Gregor’s poster sold out pretty fast. And so we did it again the month after. And the month after that. And the month after that. We have now been working together for just over 3 years and have produced over 40 screen-prints designed by artists from all over the world.

This Sunday at On Stage sees the first time we have exhibited all the posters together. All available posters will be for sale at a special price just for the event, and Idle Beats have put together 20 mystery tubes for only 50rmb, containing a random poster from our collection! Get down early and grab a great piece of art for your wall! 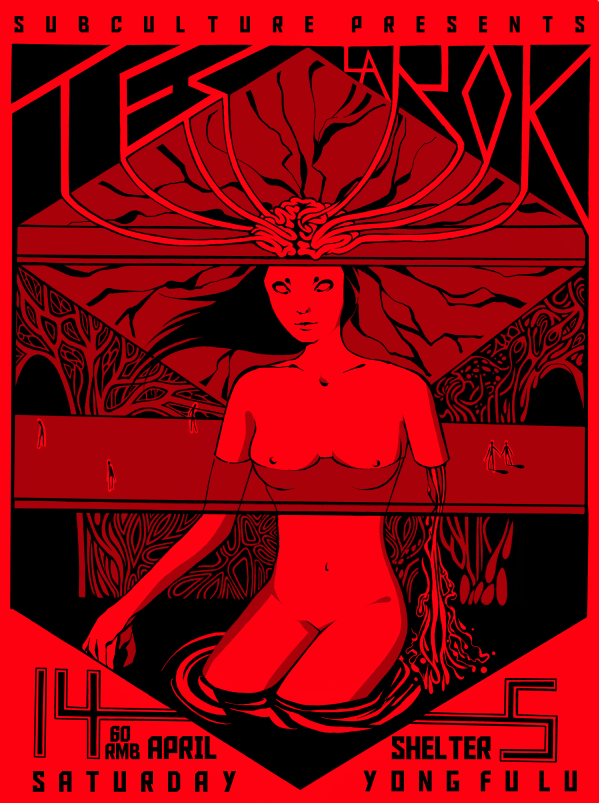 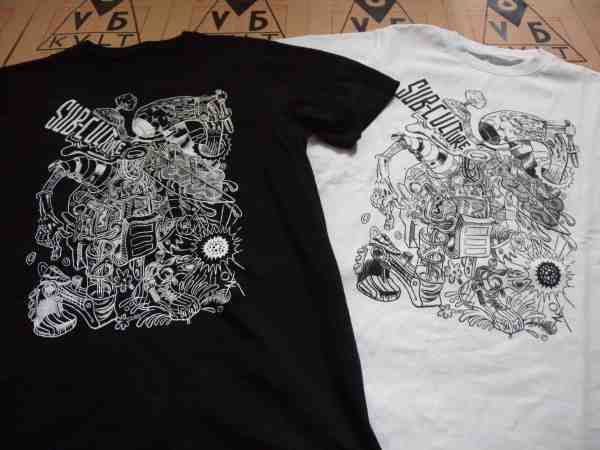 Some of you may have seen pictures of our new t-shirt that we’ve been throwing around online the last few day so we thought it was about time we gave out a bit more info on it.

The shirt, made for our 5-year anniversary, is designed by Manchester’s Zeke Clough, the artist responsible for Shackleton’s ‘Skull Disco’ and ‘Woe To The Septic Heart’ artwork, as well as the artwork for the first release on ‘Acid Ragga’, the deadly new label from The Bug. 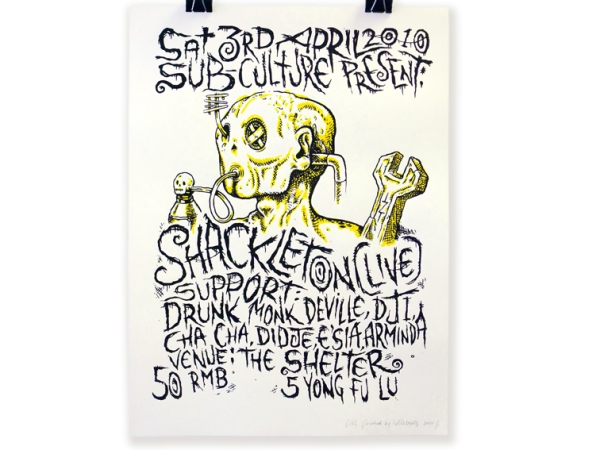 Zeke is one of our favorite artists in the scene right now, and this isn’t the first time Sub-Culture has collaborated with him. Back in April 2010 we brought Shackleton over to China for the very firs time. It was a pretty big thing for us as Shackleton doesn’t travel around so often, and previous to this tour he very rarely flew. We wanted to do something a bit more substantial for the poster, and as the Skull Disco releases have some of the best artwork in the ‘bass’ scene, we thought it would be great to get Zeke to design the poster for the event. We got in touch with Zeke and he agreed to do the design, and when he sent it over to us we were blown away with what he did. Around the same time, Split Works were putting on the first Jue Festival and one of the events involved a screen-printing workshop by Idle Beats. We’d never heard of Idle Beats at that time (it had only just started up and was still operated from Nini’s home) but we sent an email to them to see if she would be interested to collaborate with us and screen-print the poster. Both Idle Beats and us were really happy with the results and how it was received and since then we have been working closely together and producing hand made event posters and art prints every month for over 2 and a half years.

This t-shirt, as well as marking our 5 years in the scene, is also the beginning of a larger project we will start next year – SVBKVLT Clothing. We’ve been wanting to start making t-shirts for a while, and dabbled in it a couple of years ago but weren’t totally satisfied with the results. Its actually pretty difficult to find decent shirts in Shanghai. This time we wanted to do it properly, and after asking around for contacts, we hooked up with Carlos Gibbs at The Texture Company and were really impressed with how they runs things. We chose the material, the cut and the printing technique and we are more than happy with how they turned out.

The t-shirts are screen-printed on 180gsm, 100% cotton shirts and come in black with white print or white with black print, in sizes from S to XL. They are packaged in hand screen-printed, hand numbered envelopes (printed by Drunk Monk during his first workshop at Idle Beats) and come with the Sub-Culture Tokyo CD and some SVBKVLT stickers.

Limited to 50 pieces in each colour, they cost 150rmb each. To pre-order please email subcultureshanghai@gmail.com. The shirts will be released and for sale this Friday @ Dada Beijing and Saturday @ The Shelter Shanghai at our anniversary events.